It uses the EMOTIV platform.  According to the blurb on the neurogadget website:

NEUROTiQ turns brain activity into colorful lights that correspond to specific brain states according to the followings:
The company producing this item, Sensoree (http://sensoree.com), promotes "extimacy" (externalized intimacy).  You can literally wear your emotions with a variety of their "artifacts" (products).

The company even has an entrainment meditation application (http://sensoree.com/artifacts/thetavision-instant-meditation/).
Posted by Alan P. McAllister at 12:23 No comments:

A study by Cahn et al (2010) looks at EEG during Vipassana meditation in the Goenka style.  The lead-up discussion points to other studies of Vipassana that have more in common with the Mahasi style without, in my view, sufficiently highlighting the great difference between these two styles.

The style of meditation studied is described as follows:
"The specific Vipassana meditative technique involves attentional scanning of sensations
throughout the body in an iterative and cyclic fashion, scanning body sensations from the top of the head to the toes and back again repeatedly, with the concomitant adoption of an attitude of detached observation and non-reactivity to any sensations and thoughts that may arise."


The following is a summary of what they found:
"The pattern of meditation-induced increase in parieto-occipital gamma activity, concomitant decrease in frontal delta power, and a shift to a more frontal distribution of theta activity suggests that sensory processing and cognitive processing were altered during meditation relative to the control state."

They entertain alternative hypotheses about what occurred with this increase in gamma activity.  It is possible that this is a specific effect of the iterative body scanning technique, or it may reflect the enhanced perceptual clarity often reported in open-monitoring techniques.

This study highlights several problems with studies of meditation.  First, there are very real differences between different meditation styles, even when they come with a similar label.  One cannot assume that the findings of this study would generalize to Mahasi style Vipassana, for instance.  Second, the band widths are not standardized across studies.  The gamma band (35-45 Hz.) in this study is not comparable to the gamma band in other studies:  25-42 Hz. in Lutz et al, (2004) and 25-35 Hz. in Berkowitz-Ohana et al (2011).  Third, the control conditions of "relaxation" or "everyday thinking" are highly problematic given that most seasoned meditators will meditate as soon as they sit quietly and close their eyes.

Posted by Alan P. McAllister at 11:30 No comments:

Yet another EEG wearable

For those into lucid dreaming, there is a new product using EEG that promises to help:  https://iwinks.org/about/aurora.  It can be used with or without a smartphone. 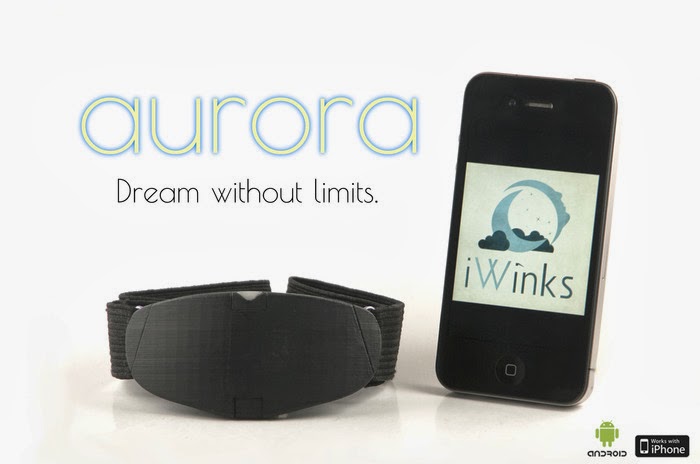 Posted by Alan P. McAllister at 05:59 No comments:

Beware of dependence on electronic technology

Here is a scary story that should remind us all of the risks of being dependent on electronic technology:

The EEG view of the default mode network

Studies of self-referential processing and mind wandering point to the role of the default mode network (DMN), which is prominent when there are no task domains.  Most recent studies of the DMN use fMRI.  An interesting study of the DMN was done by Chen et al (2008) with EEG.  Using a high density 128 channel array, 15 healthy female subjects were tested in eyes-closed and eyes-open conditions and given no other instructions than to relax, the idea being that this would represent the DMN. 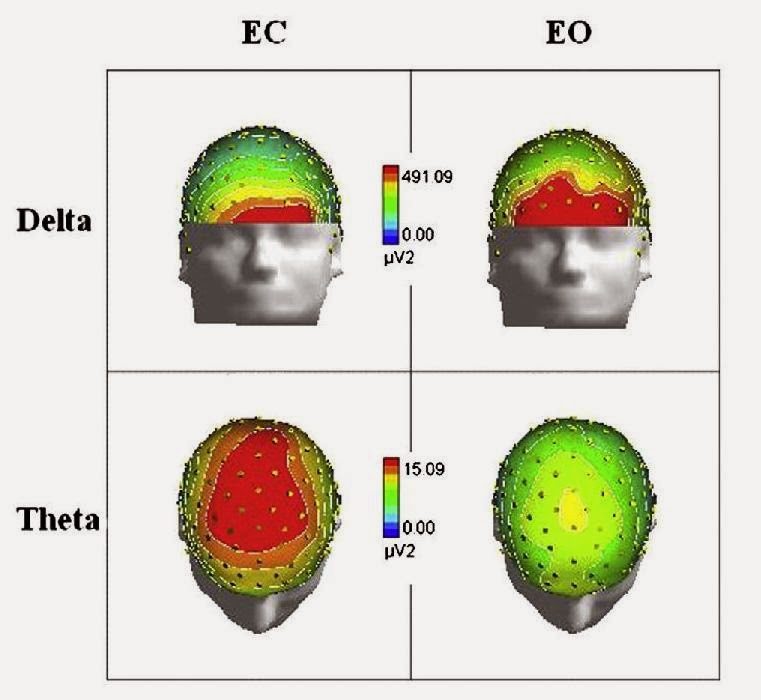 This study provides a useful reference point for understanding what the DMN looks like in terms of EEG, and, in particular, the findings can be useful in interpreting the fMRI and EEG studies of what occurs in meditation. 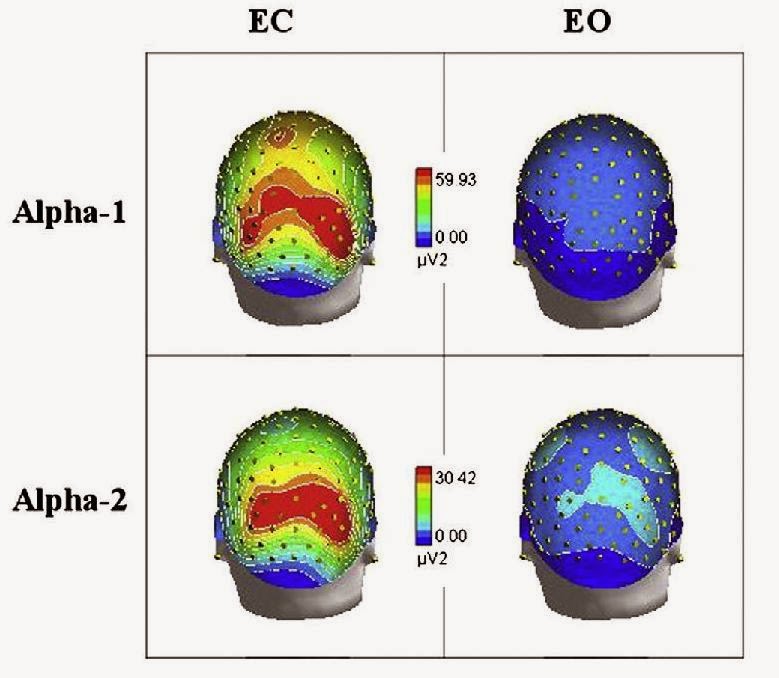 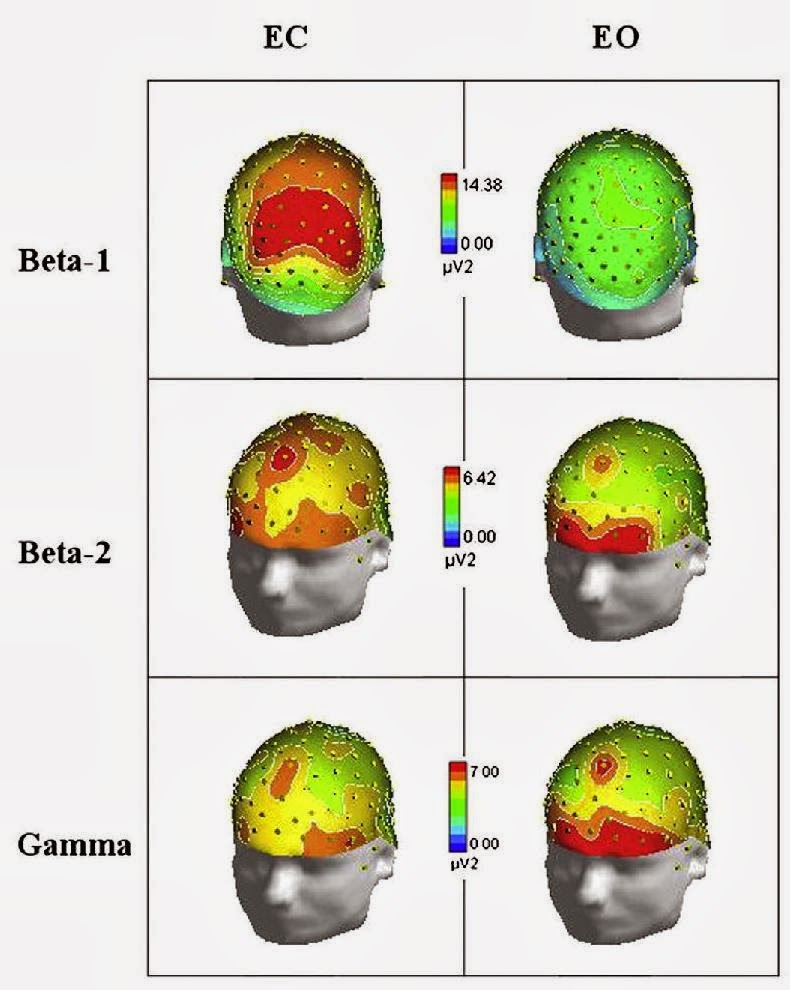 Posted by Alan P. McAllister at 16:14 No comments:

Antoine Lutz and others (2004) studied the EEG gamma band activity in long term meditators in contrast to controls new to meditation.  The type of meditation studied was "objectless" loving-kindness and compassion meditation as practiced in the Tibetian Buddhist tradition.  The authors looked at baseline resting state prior to meditation, during meditation, and baseline resting post meditation in the long-term meditators and the controls.  They examined the ratio of fast wave activity (25-42 Hz.) to slow wave activity (4-13 Hz.), absolute gamma, and gamma phase-synchrony measured over long distance electrodes.  They found that for the practitioners compared to the controls the ratio of fast wave to slow wave activity was higher prior to, during, and after meditation in medial frontoparietal electrodes.  Again, for the practitioners compared to the controls, absolute gamma at bilateral parietotemporal and midfrontal electrodes was higher, and the size of phase-synchrony patterns increased for practitioners during meditation.  The authors also found that the extent of training influenced the spatial distribution of gamma phase-synchrony patterns.

The authors conclude that their study provides evidence that meditation practice of the type studied results in increases in the level of gamma activity during meditation and that baseline levels are higher for long-term practitioners before and after meditating.  Their study is consistent with the idea that attention and affective processes, which gamma band activity reflects, can be trained.  Their study demonstrates that this type of objectless meditation has a different profile than concentration meditation characterized by increases in slow alpha or theta during meditation (Shapiro, 1980).

Alan P. McAllister
I am a psychologist working in a community clinic in a small town in rural Ontario. I have practiced meditation off and on since I was an undergraduate university student. I have been practicing meditation in the Mahasi Sayadaw tradition since 2001.